How to capture raw 802.11 frames with Kismet

Kismet is an 802.11 layer2 wireless network detector, sniffer, and intrusion detection system. Kismet will work with any wireless card which supports raw monitoring (rfmon) mode, and can sniff 802.11b, 802.11a, 802.11n, and 802.11g traffic (devices and drivers permitting).

Kismet is licensed under GPL. Most popular Linux distributions come with Kismet packages that can be installed from online repositories. A Win32 port is also available but only works with certain commercial wireless drivers that enables capture under Windows - almost none of the Windows drivers comes with your wireless card supports raw capture.

Check if your wireless card is supported against the list in Section 12, Capture Sources, of Kismet README

This HOWTO assumes you are running Fedora Core 8 and have installed a supported driver for your wireless card. 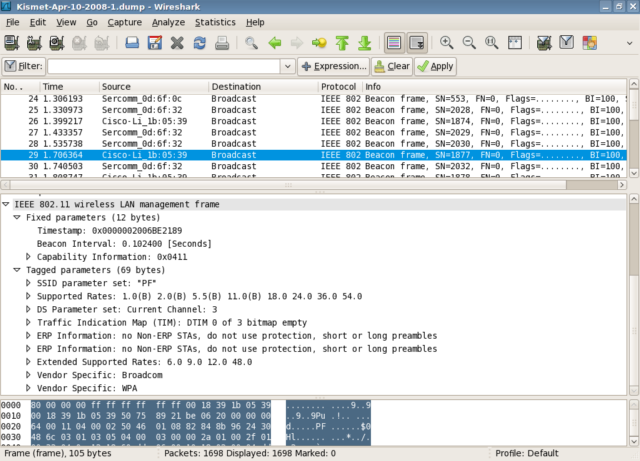 Contents on this site are licensed under a Creative Commons Attribution-ShareAlike 4.0 International License.